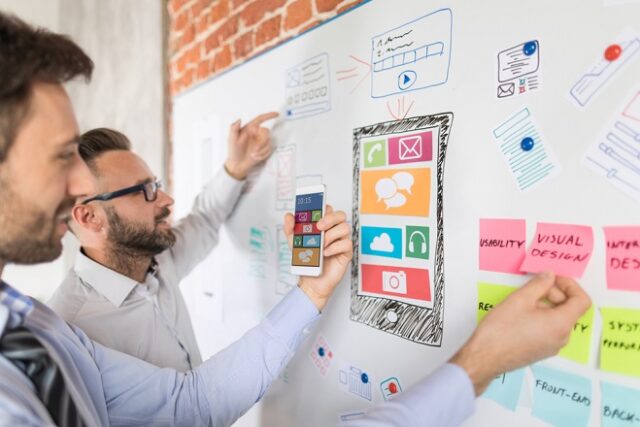 Every UI/UX designer must get a grip of available digital industrial tools to achieve your goals. The workflow will be requiring lots of platforms and programs to deal with and to communicate things in an efficient way among the team members while creating animations. Hence it is very important to have a good learning curve in the different available tools for optimized work.

User Interface (UI) design is all about the user interacting with the interface. Every UI designer will get a blueprint from User Experience (UX) designer and make it more visual and interactive with the creativity.

For the understanding from a non-technical point of view, UI is to design buttons, choose colours and fonts for the sites to run a usability test. UX designer’s main focus is to bring the best user experience for those who use your product or service.

Let’s dive into the top 8 tools used by a majority population of UI/UX designers.

Template.net is a great online design tool which allows designers to design all kinds of graphic design for free. You can edit and download them online in almost all formats.

It creates premium designs and documents for a wide range of clients. They are a worldwide group of programmers, artists, designers, lawyers, marketers, and writers. They all have the same goal in mind: to get the world’s job done faster and smarter!

Why did you pick them? Simple! Why start from scratch when you can use our massive collection of 100,000+ templates to get your task done faster? Professionally designed, instantly downloaded, ready-made templates that are readily editable, shareable, and printable. Simply browse, search, save, and download the templates that are easy to use.

What role do they play in your company? They standardize your business to aid in the creation of brand identity and visibility, as well as the development of larger, better, and faster business processes and the improvement of productivity through improved organization and communication. You will save time, money, and frustration, as well as thousands of dollars in designer and legal fees.

Sketch is one of the most popular among the design tools in the industry and every UI/UX designer must be aware of this digital design application at the earliest. As Sketch is a vector-based tool, and hence resizing can be done very smoothly without any loss in sharpness of the image. Because of the delivery of consistent prototype and elimination of the tiresome part in designing, it can help UI/UX designer to dive directly into the creation of designs and can saves a lot of time. Also, Sketch can help you to integrate with the third-party plugins and there is no prototype tool that cannot be used with it.

Sketch is only available for MacOS and you need to pay for the continuous usage. Also, you have to renew the license every year to get their updates instantly. This is one of the preferred tools because of a big library of symbols, layout styles, fonts with its wide alignment feature.

Weje is an online canvas for various design purposes: prototyping of websites’ UI/UX or physical objects, creating mood boards or collages, planning and managing design projects, mapping ideas, and so on.

Unlike Figma or Sketch, Weje is rather a collaborative tool for teams. Here, they can create countless online canvases for free, upload various media files and group them into cards, draw, leave comments or online sticky notes about needed edits or further considerations, and share completed design projects with managers or clients. Weje has a named cursors option, which is quite helpful during simultaneous working with canvases.

Figma filters the best from Sketch and adds some spices that Sketch missed. It is one of the easy tools as it does not require any platform and is totally browser-based making it accessible for everyone from anywhere at any time. Synchronization can be done very easily as a single change by one user will be implemented on the whole project without the need of publishing the changes.

Figma supports real-time collaboration with many users to work on a single project. You can monitor what is going on in real-time and can find out who is working. The perk of Figma is that it is available completely free for individual use which you can make use for the practice sessions and to know about the features in the tool.

Unlike Sketch, Adobe XD can be used in both Windows and MacOS and can also be used in mobile versions, web and even voice. It is also a vector-based tool and have its own kingdom to for creating prototypes and mock-ups. For those who were already good with other Adobe products and found the interface of Adobe XD much easier due to the familiarity.

Adobe XD is most the UI/UX Designer favourite as it has many sophisticated tools and also allow real-time collaboration with other designers in a single project. Due to its extreme versatility with too many features for designing, prototyping, sharing and creating a complete design system with collaboration, Adobe XD can be a go-to tool for UI UX Designer.

InVision is a web-based prototyping tool that gives a bundle of awesome tools for UI/UX designer. The tool can be popular among the people who needs collaboration with a great team and give comments directly for presenting their ideas across the team. This tool provides with a digital white board that will help you communicate with the others.

InVision can obviously be a very useful tool as they are giving a seamless crossover experience between Sketch and Invision with Craft Prototype. Also, the updates are giving improved versions continuously and the sign up is also free for the users.

A UI/UX designer who is new to the role can find things easy when they try Marvel. This tool has the ability to create low fidelity and high-fidelity prototypes, interactive wireframes and also have handoff feature that will provide all the HTML code and CSS styles to start the creation, for the UI/UX designer.

Marvel is a kind of prototype tool than can makes it look like a final product due to its great interactions and will even allow user testing.

For more advanced features along with real-time interactions, Origami studio can be used and it will also work well with Sketch. This tool is basically built for and by Facebook designers and the complexity level can be high than the Sketch and InVision.

To integrate the complex features, the platform is providing a sophisticated patch editor to build complete prototypes which can work as a real website or application. Copying and pasting layers from Sketch without any hang ups is possible with this modern tool.

Origami studio runs only on MacOS and since it is more advanced, the learning can be difficult but definitely has a lot to offer. Hence, this is not usually recommended for newbies.

Proto.io is an application prototyping platform that will give the results like “Prototypes that feel real”. This design tool knows what we are trying to do and help us in creating, organizing, integrating and testing accurate mock-ups.

The real-time communication with the other users of the team with comments and video feedbacks is made possible in this tool and it also integrates with well-known testing products which looks like Lookback, Userlytics, and Validately.

Balsamiq gives UI UX designer a user-friendly interface that helps in making low fidelity wireframes in an easy way and is perfect for designers, developers and project managers. This tool can especially very helpful for the beginners who just started designing, and people with no idea about wireframing, as you can directly jump into creation and put together a good one. Balsamiq does not care about the skill level of the creator and works smoothly even with the whiteboards to share the comments.

User Interface library is the most appreciated feature by UX design agency or designer as there are versatile elements to just drag and drop onto the wireframe.  The rapid wireframing tool received much love in the digital industry and is easily available on desktop or a cloud app. Once you are done creating, you can either run usability tests or print it out and hand over to the developers.