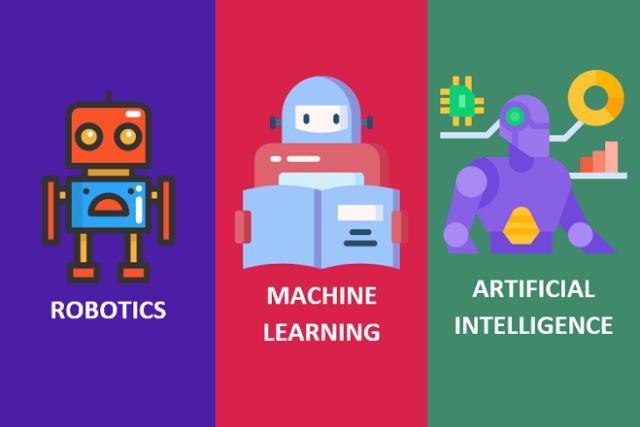 Before discussing the differences between robotics vs machine learning vs artificial intelligence, Let’s understand the definitions and their functions.

Consider the following operations and applications on your phone: Uber, Google Maps, music recommendations, and voice searches. These are artificial intelligence examples. We are going to look at robotics and AI, as well as how AI can be utilized in machine learning. Let’s begin.

Robotics is the interaction of science, engineering, and technology that deals with the production of robots. A robot is defined as a machine that can be programmed to carry out autonomous or semi-autonomous functions. Robots can be used to assemble cars in factories, for example. Three main characteristics constitute robotics:

There are various types of robots, and they include:

What is Machine Learning?

Machine learning is said to be a subset of artificial intelligence, which gives systems the ability to learn automatically while improving from their experiences without being reprogrammed. The goal behind machine learning is to create algorithms from the data and give predictions. For a machine to learn, you require a database, features, and dataset. Let’s take a look at these three components briefly.

What is Artificial Intelligence?

Artificial intelligence definition entails the study of ways to build intelligent programs as well as machines with the ability to solve problems creatively. It seeks to encroach on functions that have been considered to be human prerogative by modeling how the human brain works. But imitating the human brain is a bit more complicated.

You may have heard someone talk about narrow/weak AI, general/strong AI, or superintelligence. If you have not, don’t worry. The above are the three main branches of AI. Let’s explore their definitions and implications.

According to artificial intelligence news, scientists are nowhere near achieving this form of creation. For such developments to be made, innovation on making conscious machines with a full set of cognitive abilities will need to happen. Here, the theory of mind AI is used to help robots discern the needs, beliefs, emotions, and thought processes of human beings.

With strong AI, machines gain consciousness and can understand people. However, with ASI, they not only imitate human intelligence and understand behavior but also gain self-awareness and exceed human intellect and ability. This is still nowhere near invention.

Now that we have looked at robotics and levels of AI, it’s time to understand these fields and functions in terms of artificial intelligence. AI in robotics entails using some sort of machine learning where an algorithm is being trained to produce a given output. But AI is distinguished from normal programming by the word “intelligence.” A non-AI program will just carry our defined instructions sequentially.

As we mentioned earlier, humanoid types of robots fall in the AI category. The most notable example, in this case, is Sophia, who is controlled by AI programs. However, most industrial robots are not AI in nature and have been programmed to perform repetitive tasks. They are limited in their capacity and output in comparison with AI robots.

Since there can be similarities when it comes to robotics and AI, these two are clearly different in application and shared aspects. But artificial intelligence and machine learning are related as machine learning is also a method of creating AI.

By now, you have understood what artificial intelligence is. We have also talked about robotics in detail by including various types: autonomous, humanoid, pre-programmed, and augmented robots.

Machine learning in artificial intelligence science involves giving the systems the ability to learn automatically as they continue to improve their experience without being programmed. This relies on the use of intelligence to achieve these milestones.

AI has the potential of continuing to make life easier. As applications for narrow AI increase, we will see more significant strides in technology. If you’re hoping for a future where you can integrate your consciousness into a machine, scientists are still years away from such a breakthrough. Besides, AGI application is still thought to be science fiction. However, with advancements in machine learning and artificial intelligence, we’re hopeful of a future that sees machines and humans work together. Maybe even eradicate diseases and poverty? Wouldn’t that be amazing? Please let us know what you think about it in the comments.