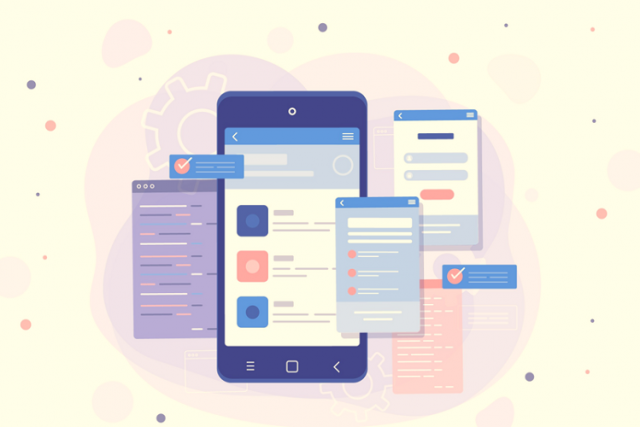 According to Statistics, one-third of mobile app developers use a cross-platform framework to build apps.

Cross-platform development is becoming more popular as it enables running apps across several platforms, including iOS and Android. It aids companies in reaching a larger consumer base and increasing revenue.

React Native and Flutter are the clear victors in this sort of development after some time in the market. Why, then, do we want to discuss Kotlin vs Flutter rather than Flutter vs. React Native?

What is Kotlin, and will it endanger the success of Flutter? What advantages do the two technologies offer? Whether you should hire Kotlin developer or Flutter developers.  Let’s find out.

Additionally, developers can share their code, business logic, and data layer among platforms like Android, iOS, and others, thanks to Kotlin’s built-in multi-platform capabilities.

Kotlin is well-known for its interoperability, safety, tools, and assistance.

Since the introduction of Android, its official languages were the well-known Java and C++. However, Google made Kotlin the official programming language for Android at Google IO 2017 and integrated support for it into Android Studio. This made it possible for developers to translate existing Java code into Kotlin and run both languages concurrently in their projects.

In 2013, Google first bought Flutter, which had already begun collaborating with industry titans. Fundamentally, Flutter is a free, open-source framework for creating apps with a native feel for iOS and Android, all from a single codebase.

Flutter is utilized by developers and organizations worldwide and functions with already written code.

This difficult issue has sparked much discussion among tech enthusiasts and developers. However, deciding between Kotlin and Flutter is more of a matter of business requirements than a universally superior option.

When deciding which of these to use, consider the particular requirements of the project you are working on. Kotlin, for example, is a better option for applications that depend on performance since it has stronger performance capabilities.

Additionally, Kotlin would still be a fantastic choice if your application had access to many native components like Bluetooth or NFC because it has been around for a lot longer and has more resources for them.

However, using Flutter would be less expensive and offer certain advantages if you’re working in a very small startup team. It would help you build out your minimum viable product (MVP) faster with strong UI appeal.

Suggestion: If you want to include native components in your app, hire Kotlin experts. However, if you want an intuitive app for your startup, hire a Flutter developer.

With the most pull requests (PRs) in the final quarter of 2021, Kotlin has been listed as the 14th most popular programming language on GitHub.

The Flutter SDK’s primary programming language, Dart, is ranked 16 in both popularity and the amount of PRs in the fourth quarter of 2021. Since then, there have been numerous cooperative initiatives within the Flutter community and a sizable number of feature upgrades in the framework performance.

Kotlin has 40k ratings and 5k forks on GitHub, whereas Flutter is the most popular, with 138k stars and 21k forks.

Additionally, Flutter’s most recent version, 2.10, was released on February 3, 2022, and up to 50,000 Flutter apps—at an average rate of 10,000 new apps per month—have been posted to the Google Play store. Three months later, there were over 90,000 Flutter apps, representing a growth increase of almost 80%.

Even though Kotlin has more apps available on the Google Play Store, Flutter has substantially more momentum and popularity when compared to Kotlin for creating mobile applications.

The quantity of searches for both Flutter and Kotlin over the previous 12 months is depicted in this Google trend graphic. This trend data shows how these two have received attention and interest over time.

According to the Flutter showcase website, numerous significant businesses have converted their Kotlin codebase to Flutter. These businesses include Square, Google Assistant, The New York Times, Tencent, Realtor, and Tencent.

Flutter excels beyond reproach in terms of performance. All because of the hot reloading feature it provides to its users.

Why does that matter?

As a result, Flutter’s hot reloading feature makes it easier for mobile app developers to make changes on the backend while concurrently seeing the results on the front end.

To put it another way, Flutter enables mobile specialists to assess quickly whether or not the modifications made to the business logic seem appropriate in the front end with other app parts.

Kotlin is another programming language that performs admirably.

One of its main advantages is that the Kotlin language compiles the code in the same format as the intended platform. This, in turn, enables customized performance than that of its native competitors.

Kotlin and Dart are more comparable in syntax than in other respects.

Although Dart uses semicolons and Kotlin does not, both languages have the same commenting and handling of white space features. Additionally, Kotlin and Dart are both object-oriented programming languages.

On the other hand, Kotlin is a general-purpose programming language that allows UI developers to modify the UI experience and easily construct an app that aligns with their vision.

Kotlin looks to be a little slower than Flutter. Kotlin, however, has a lot more to offer. Its clear syntax and code reuse speed up app development and shorten the time it takes to get an app to market.

Even though the app’s complexity affects how quickly code is written, both frameworks significantly reduce the time needed to construct an app by leveraging a single codebase to build apps that run on various platforms.

The communities for Kotlin and Flutter are very active. However, given that Flutter is more recent than Kotlin, it has a more active membership engagement and is becoming more and more well-known.

The Flutter documentation is also quite thorough and current. Given that it offers knowledge based on experience, it’s an excellent place to start for anyone unfamiliar with the framework. This means if you hire a Flutter developer for your app development, there won’t be delays in the bug fixing and on-time deliveries due to internal errors or issues.

This refers to the price of creating a cross-platform application using the Flutter framework or a native application using Kotlin. Flutter is the quickest approach to building your MVP because it is open source, free to use, and has no additional costs.

Plus, you can produce and manage Android and iOS apps simultaneously from a single codebase. Developing a mobile application with Flutter takes far less time and money.

Using this framework to develop a full-fledged mobile application would incur additional costs for paying someone to create an iOS version of the app, increasing complexity and cost by maintaining two separate codebases.

Flutter and Kotlin have different uses for testing support than one another.

When it comes to speed, Flutter does well but falls short of Kotlin, which normally runs more quickly because it compiles to the target platform’s format.

If speed is crucial to you, look for Kotlin developers for hire, as Kotlin is suitable for your app.

In contrast, you can install Flutter on more development platforms than Kotlin, including Android Studio and Visual Studio Code. Comparatively faster than Kotlin, Flutter requires less setup time before a project can begin.

Overall, Kotlin and Flutter both have their specific advantages and disadvantages. The choice of language depends on your personal preference and business requirements. Here are some more points to help you with your old tasks.

All frameworks and programming languages have their advantages and disadvantages, and when it comes to choosing between Flutter and Kotlin for mobile application development, they all have pros and cons.

Both frameworks endeavor to shorten development cycles and lower costs in order to establish a presence on the iOS and Android platforms.

Kotlin is favored when creating Android applications. On the one hand, Flutter is more well-liked than a trendy Kotlin. However, both frameworks use a single codebase to deliver performance similar to native. These two frameworks are fiercely competing with one another. And they become harder to predict with each subsequent release.

So, it is advised to talk to an experienced mobile app development company and examine your cross-platform app requirements and priorities to establish which is better – Kotlin vs Flutter. Depending on that, hire Kotlin developers or Flutter.