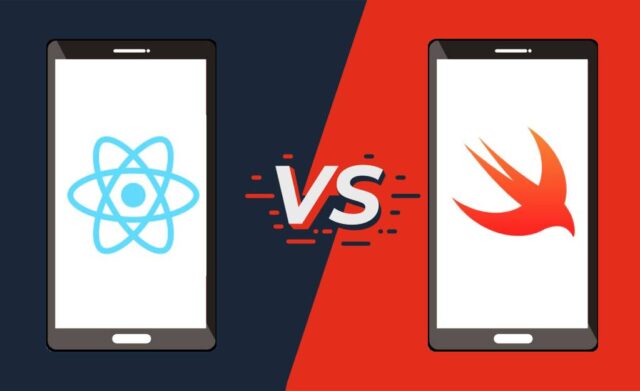 Are you planning to develop an iOS app? Definitely, there will be a question in your mind about the technology you should choose while developing an iOS app. Should you choose React Native for a cross-platform solution or Swift for a native app? In this writing, we will find out the answer to this question. Both of these technologies have their own advantages for app development, so; we are going to help you in making the right decision regarding technology selection.

Know about both the platforms Swift and React Native in brief:

If we talk about a native and iOS dedicated development framework, then it is Swift. It is fully intended for developing iOS-based applications such as tvOS, macOS and others. It is a future-centric app development framework. Apple-designed it to use it only on iOS devices; therefore, it works well on iOS apps than other frameworks. Swift assists developers to leverage the capabilities and the power of most of Apple’s hardware.

What is React Native?

It is developed by Facebook; this is the biggest reason for its acceptance by developers across the world. Due to cross-platform functionality, it enables developers to save their time and reduces the cost of development. The main thought behind the development of React Native was to improve the performance, feel and look of the applications for both Android and iOS platforms.

Let’s see the important factors to choose the best technology between Swift vs React Native for developing your app for iOS:

When it comes to Swift, then you can leave stress-free from such kinds of issues. With Swift, developers can leave the task of maintaining, updating the APIs and libraries on Cocoapods of Apple. Developers get notified whenever there is a need to update a package. In this way, Swift makes the maintainability of projects easier.

Use of JavaScript made React Native a robust app development framework. It offers the apps and run-time environment for every screen size. The power of JavaScript removes all types of coding issues and screen size issues for all iOS devices and makes it easier for developers.

As stated earlier, Swift is basically designed to develop highly functional iOS applications; it offers the best in class user experience by using modern design standards. With Swift, developers can create an intuitive and eye-catching user interface for the users.

We can say that Swift offers more security than other frameworks by using different encryption technologies and available APIs from Apple. It is easier to encrypt and secure sensitive data using Swift. If your app contains highly sensitive data, then you can write a dedicated encryption code for your app.

Performance is one of the most important factors considered by the developers while developing an app. It is the performance of the app that also plays a vital role in the success of an app. React Native users libraries and APIs to develop an app. These APIs and libraries work as a bridge between the framework and code; therefore, it may affect the performance of your app in some ways.

Swift is a better option for those who need a dedicated native iOS app with unique graphics effects. Swift is also a good choice for the best apps that need heavy operational tasks.

Choosing the best and most suitable technology according to your budget and project requirements is key to make an app successful. In this writing, we have described some factors that can assist you to know the suitable platform for your app development needs. Make the right decision while choosing an app development environment between Swift vs React Native.

How the Digital Age Continues to Disrupt the Finance Sector

Residential AC Services Near Me