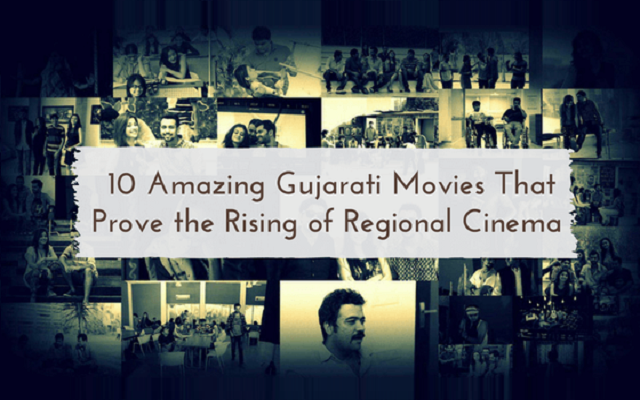 The regional cinema industry, which ranges from Marathi, Kannada, Telugu, Punjabi to Bhojpuri and Gujarati are a few to mention here but form a very important part of the life of the people living in those concerned areas.

Some of the regional cinema industries are going through the cinema revolution in some recent years and when we talk about the quality and topics of movies, which are being adopted in that regional cinema, are far more worthy of great appreciation and are in fact, motivating enough for the Bollywood cinema makers to go into the remake of such.

Such is the case with the Gujarati Cinema Industry, which is showing the great rise of the regional cinema industry in the country.

The Gujarati movies, which are referred to by the name Dhollywood or Gollywood, is one of the major regional film industries of the Indian Cinema Industry, which proves that the level and quality of regional cinema is increasing with each passing day.

Here’s a list of ten such Urban Gujarati Movies, which proves so:

A Satire Film based on a story of Gujarati Family, who desires to send their son to The USA. Considering the level of the film, it is treated much like that of a Bollywood Film.

Kevi Rite Jaish is considered as the first Gujarati Movie, which was packaged very minutely and precisely.

Chhello Divas is one of the most watched movie in the Gujarati film industry and the most loved film by youngsters. It is considered as the masterpiece in the Gollywood Cinema.

One of the most successful Gujarati films and most well received from both the audience and critics, Bey Yaar is something which offers the Gollywood, a new renaissance.

It is a complete packaged movie and the story revolves around two friends who are in a hurry to make easy money.

The Better Half failed commercially but drew the attention of the urban audience and several critics all over.

This Gujarati movie was the first film on super 16 mm format and the first released in multiplexes and thus can be said as a history maker.

A Comedy, based on the life with the concept of money, this Happy Familyy Pvt Ltd is based on the plot, where the Mehta family visits a village, where the barter system is prevalent. This is a hands down entertaining movie of the urban Gujarati Era.

Polam Pol is a Gujarati woman-centric Movie, which conveys a message of women empowerment to the people and the best part of the movie is that the message is conveyed in not so intense manner but in a well-lighted manner.

Witty one-liners along with the cinematography are the highlights of the movie.

Selected as the official India’s entry for the best foreign-language film in 86th Oscars Academy Awards, The Good Road is the most talked Gujarati movie and the success story even is a talk in the Hindi film industry.

The Success story of this movie can be judged that the film won national award for best Gujarati film. Based on the wonderful theme of multiple stories with the Kutch Highway being the center stage of the stories, this movie is a real masterpiece.

Another good movie of the recent past, this movie is based on the story of a youngster who wants to make himself fame in the film industry.

The story revolves around the story of the passion and struggle of the boy in pursuit of his passion. The Cinematography and music are just other highlights of this movie.

Saptapadii is the first Gujarati movie under the banner of Amitabh Bachchan Corporation. Featuring movie stars Manav Gohil and Swaroop Sampat in lead roles, Saptapadii revolves around a contemporary Gujarati woman in order to pursue what she believes in, risked her settled married life of 20 years.

The success story of the movie can be acknowledged by the thing that it was selected in 7 film festivals across 5 different countries.

The Gujarati Cinema industry is on the rise and many several masterpieces are under the creation for a great example.