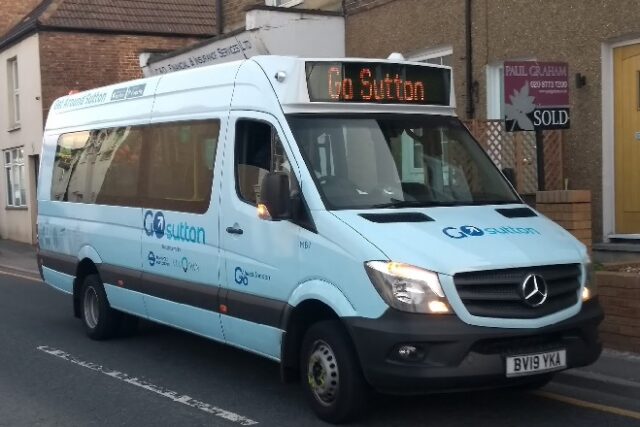 Nowadays, the most evolving sector in the economy is transporting. Every day there is something or the other emerging to bring out various options for all the inhabitants in regards to commute daily.

Earlier, we observed new companies making their way in the transport sector by launching E-scooters; the most micro mobile solutions for all the frequent travellers.

Now Sutton ; the town in England is observing a significant change in the public transport industry as a new form of public transport has been recently introduced in the city on a probationary period of 12 months of on-demand bus trial.

Using the platform of mobile technology, GoSutton aims at researching the adaptability of building responsive transport services of the bus on demand which can further accelerate the role of public transport use.

Increasing the use of public transport, walking, cycling and other ecological means to commute by 2041 is the critical aspect of the Mayor’s transport strategy which ultimately points towards making the streets of London safer and less polluted.

Sutton was hand-picked as the location for carrying out the trial as the city is flooded with the use of cars and faced many difficulties when talked about traditional ways of public transport.

The metropolitan has 24 busy bus routes and nine railway stations. However, due to the failure of using public transport, the buses did not practically run across some parts of the city.

The trial focuses on ways to be more creative like on-demand responsive travel is likely to boost up the direction of the traditional bus network, improvising the conventional public transport and reducing the use of cars.

The buses can accommodate up to 14 people. All the seats are well-equipped with USB charging points and free Wi-Fi. The bus will move on the streets in a specific area rather than the linear path.

Customers will no longer have to wait for the bus to arrive; they can board the bus whenever they ask for it via the GoSutton app or on the phone. Advanced algorithms based technology will enable multiple users of the app to share a single-vehicle harmoniously.

The technology guides the passengers by virtually creating a bus stop to their nearby locations for pick-up and drop-off and actively makes the route of the vehicle in real-time.

The technology aims at serving customers in the most efficient and effective way. Even further ensuring that separate buses are not disposed for the same passengers at the same virtual bus stop.

Fares for such kind of service are uniquely drafted at 3.50  pounds with every addition of group booking brings the fare at a lower rate at 2 pounds. It will be utterly reachable with accepting the freedom passes, and all the GoSutton vehicles will be able to accommodate a wheelchair.

The GoSutton vehicles also meet the needs of the stringent emission standards, which is an Ultra-low emission zone and is perfectly designed as discussed by the Mayor.

Transport for London will jointly work with Go-ahead and ViaVan to successfully deliver the trials. Go-Ahead has several years of experience in functioning buses across the capital while on the other hand, ViaVan has expertise from the technological sector.

Micheal Hurwitz, Director of Transport for London, said in a statement that we are developing the bus network in outer London as well as improving the capital’s tube and rail service. Still, we also need to change the mindsets of individuals by encouraging them so that they come out of their cars and approach a sustainable way to commute.

The trial will help the government officials to resolve the disputes attached to the traditional ways of transportation, which will ultimately achieve the primary goal of making the streets better than earlier.

Deputy mayor for transport; Heidi Alexander said that On-demand buses are an innovative new form of public transportation designed to be even more efficient and convenient particularly in the outskirts of London where sometimes people find it harder to get around.

This trial will show us the statistics on whether developing demand-responsive technology can reduce the use of cars and help the city to be free from toxic air.

All the drivers deployed in this service must be well trained, and those who have completed their enhanced customer training will only get employed.

Drivers are going to receive the same perks and benefits that they used to get earlier for driving a traditional London bus.

The drivers will be getting the minimum wage and the guarantee above the existing pay grade, which stands equal to the level of the service provided by them.

Manuel Abellan: Head of Sutton’s Environment and transport committee said in a statement that Sutton Council is captivated by the new kind of bus service which is coming down to our streets.

We need progressive ways of expanding our public transport options in Sutton to get people out of their cars and improve local air quality. This is precisely what the city needs.

The second trial of 12 months will start once the government gets a positive response from the public. The service will be executed by the bus operators of RATP( a public transport company) and the technological partner MOIA which at present works with a ride-sharing company in Germany.

Both the trials have the same definite motive of maximising the demands of the vehicles and improving the existing traditional model of public transport with on-demand delivery of service.

Such on-demand platforms must be made available not in Sutton but even in other countries to enhance and upgrade the existing public transport to a brand new system.

The use of technology and on-demand bus service will attract new passengers and travelling in a group will be possible by maintaining a social distance, and this will be achievable as only 14 passengers will be accommodated in a single bus.

Such revolutionary changes in the transportation system will make remarkable changes for the environment as well as for future generations.

Vishal Virani is a Founder and CEO of Coruscate Solutions, a leading Mobile App Development Company. He enjoys writing about the vital role of mobile apps for different industries, custom web development, and the latest technology trends.