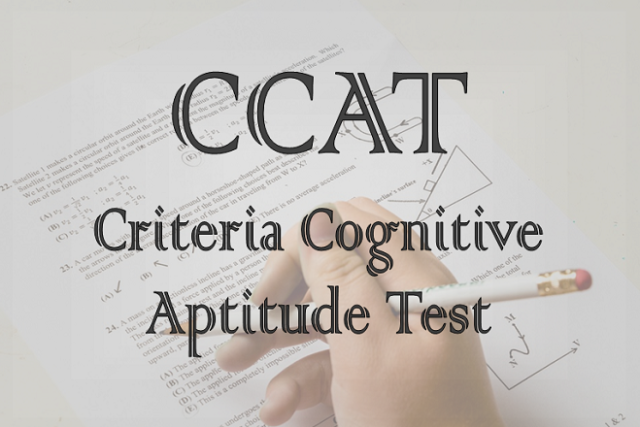 The criteria cognitive aptitude test is a pre-employment test that helps in gauging upon employee’s abilities to solve problems, learn new things, adopt new changes, apply information and to think out of the box. It is one of the most popular and important aspect that many companies use to hire fresh talent.

But do you know why companies rely on CCAT test?  It’s because, how well you perform in the test will give recruiters the idea about how quickly you will pick up the training for the new role. They consider it one of the best predictors of your performance on the job, as your high score will give them the information that how capable you will be for the specific job.

The criteria cognitive aptitude test consists of 50 questions that you have to complete in just 15 minutes.  Further, the questions will be asked from the three different sections viz. math and logic, spatial reasoning and verbal.

Although you would only have less than 30 seconds to answer each question, don’t run for attempting questions like a game.  Focus on answering correct questions to score high on the test. Once you complete the CCAT test, you will get raw scores and percentile rankings, with all your correct and incorrect questions written on it.

Things You Should Keep In Mind For Preparing CCAT

Tried And Tested Tips To Ace The Dreaded CCAT Test

Practice And Practice: To score high on the test, just practice as many as questions before the test. This will not help you beat the time, but will also make you familiar with the questions that you will get on the test.

Time Management Is The Key:  Since there will be a clock running to the one side of the test, don’t spend much time thinking. Make a reliable guess and move to the next question. Also, don’t checklist all questions just to impress the test-takers, this will eat up your time that you can spend on solving the correct question.

Know Your Strengths: While some are proficient in solving ABC questions, some love doing the math. So, know your strengths and then plan. If you are strong in math and logic, practice as many as questions about it to make a maximum score out of that section.

Don’t Feel Stressed: Stay relaxed and don’t make yourself feel stressed.  The CCAR test is designed in a way that only 2% can attempt all questions correctly in that 15 minutes. So, in case you fail in attempting all questions, don’t feel stressed. Remember, your focus should only be on making a high score with a maximum number of correct answers.

Read Instructions: Take some time and read all the instructions before hopping to the test. Further, there’s no penalty or negative marking for every wrong answer, so in doubt, guess and move to another question.

Criteria cognitive aptitude pre-employment test is helping companies pick the best candidate for their positions. So, if you want to get hired by big companies or want to land on your dream job, take CCAT and score high!