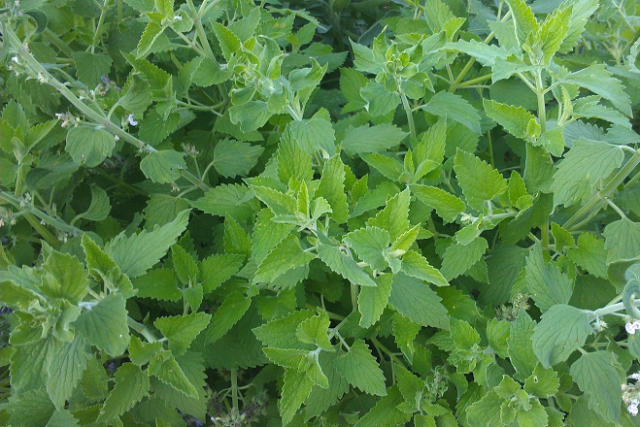 Catnip is the common term for Nepeta Cataria. It is an herb in the family of Lamiaceae (mint). It mostly grows in the United States and is a native herb in Europe for centuries.

The word catnip composes of the English word “cat” and the Old English term nepte, which comes from the Latin word nepta, an aromatic herb. You might have also heard about its other names: catmint, catswort, and field balm.

The active substance in Catnip is its essential oil called nepetalactone. Its odor is said to be effective in driving mosquitoes away. Nepetalactone mostly affects domestic cats and humans.

Though it is mostly associated with cats because they are fond of it, humans have also been using it. In fact, catnip was used as a traditional herbal medicine in treating stomach aches and fevers. It also has gentle and calming effects.

This tea is mostly used in treating gastrointestinal issues like indigestion and cramps. It can also increase urination and treat arthritis, coughs, and viruses. According to one article, as much as it can also give us relaxation, there could be mild side effects. These include frequent urination, too much sweating, and sleep interruption due to repeated visits to the bathroom.

Moreover, it is not advisable for children and pregnant women. To avoid risks in drinking the said tea, make sure to seek advice from your doctor.

In the above details, I have been mentioning a lot about cats and how they are fond of catnip. Cat is drawn to it as Icarus is drawn to the Sun or a moth into a flame.

What is in this plant that attracts the kitties, anyway? Well, it’s this nepetalactone which is found in the seeds, stems, and leaves. The moment cats smell this nepetalactone; they become blissful and euphoric. It can also stimulate pheromones — a chemical signal used by animals to communicate or interact with other animals.

More so, cats who experience a substantial effect on catnip would usually growl, drool, have an intense meow, and become more lively. In short, more like being crazy. Although it induces extreme playfulness, it can also mellow and calm cats.

What about lions, tigers, and leopards? Do they also experience the same effect when exposed to the plant? Apparently, yes. Once they’re exposed, they would also have the same reactions.

Benefits Of Catnip To Cats

Every pet parent wants the best for their fur babies, and they go to expensive measures to do so. A great thing about this mystical plant is that it’s packed with all the benefits that your feline friend needs. Not only that, they are also easily accessible with companies producing products infused with the plant’s extract.

The great thing about this plant is that it comes in different forms:

Is Catnip Safe For Cats?

Luckily, this plant is not that harmful to cats as we think it is. But it might cause diarrhea and vomiting to them when they consume a great number of its leaves.

The benefits of Catnip is truly a magical thing to behold. But let’s not forget that magic also wears off. Make sure to visit your doctor or perhaps research more about products that are infused before using one. Who knows? The more we know about Catnip, the more it is magical.