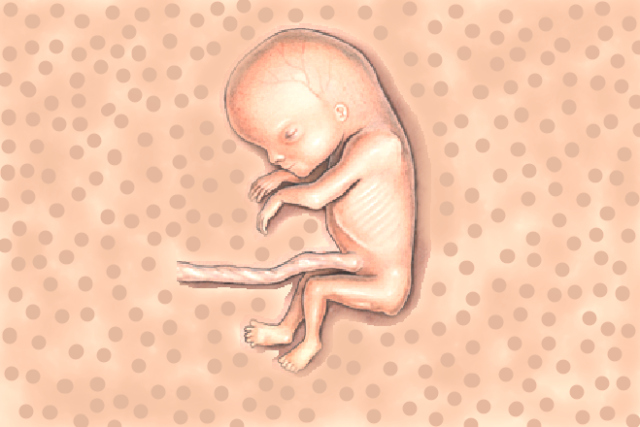 At 9 weeks of pregnancy, the baby is now headed to the end of the embryonic stage and is about to begin the fetal stage. It means therefore that it is already looking like a human and less of the tadpole that it was before. You will enjoy seeing the developments that the baby has made during the entire period and this is another week where more changes are bound to take place thus improving on the development of your baby.

Your baby at 9 weeks pregnant is still tiny measuring one inch in length and weighs roughly around 3 grams. Physically, the torso, arms, head and legs are already in place and drastically changing into those recognizable body parts. The head during this week looks as though it is lying on the chest of the baby and it is quite large in size compared to the rest of the body. It should be remembered that it take a while for the brain to fully develop since it is large hence the reason why the head appears bigger since the developments are more concentrated here.

That tail that gave you the jitters has now disappeared and the rest of the internal organs and also the muscles have developed well and are functioning as they should. The coming weeks will simply see to it that they are completely developed and effective in accomplishing their functions as they grow to the normal size. The eyelids are now fusing together and they will remain shut for a couple of weeks. The reproductive organs of the baby have developed but it is still early for the doctor to distinguish between a boy and a girl hence knowing the sex of the baby might still wait for several weeks.

The heart is beating and has now managed to divide into the four chambers meaning that it function has greatly improved. It however still is pumping at a fast rate but this is normal and should be nothing to worry about. The webbing that was around the toes and fingers is also disappearing and they are lengthening and you will manage to see this development in a well conducted ultrasound.

An ultrasound done during the 9th week of the pregnancy will give you the chance to see most of these developments giving you that amazing sense of parenthood. It can also be helpful in identifying any birth defects that could be present and you will also get to know how many babies you are expecting. The well being of the baby and its surroundings is the main thing that an ultrasound will concentrate on when done during this stage of pregnancy.

The baby at 9 weeks pregnant is quite a sight to behold and you can share in this joy by taking your partner with you for the ultrasound. It is best that you have all your concerns and questions settled during the scan to give you peace of mind knowing that your baby is doing just fine.