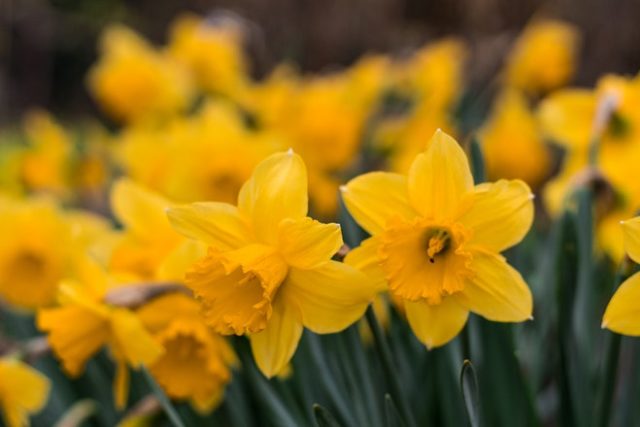 Atlanta Annual Daffodil Planting – Is it just a fluke or an actual call to action for children in need?

For a city like Atlanta where you can always find an activity or anything special to entertain you, the annual daffodil planting might be just an ordinary event for you. However, after going through the article, you might not feel the same.

What is Atlanta Annual Daffodil Planting?

Initiated in coordination with a Jewish student Am Yisrael, the Downtown Daffodil Project happens every year to support the globally spread daffodil project. The concept is to remember the millions of children who lost their lives during the Holocaust.

This project brings light on the very sensitive subject of human history that destroyed the lives of millions of people and also to bring awareness among people so they recognize the millions of people in crisis and suffering from undeserved cruelty.

The event usually takes place at the start of March or the start of April when Atlanta is already colorful. The yellow color of the daffodil bulbs represents the star worn by the Jewish children of that time. This they could be identified among the rest as a gesture of racism and obvious hatred for the Jews.

Why does Atlanta participate?

Being a city flourishing with American history in regards to the civil war and being the birthplace of several leaders of integrity, justice and most importantly; color. Yes, we are speaking about Martin Luther King Jr. whose national museum is not just a part of Atlanta activities but also a part of the rich history that this city holds.

The city has been known to have battled and won against the rapidly growing racism and obvious discrimination against the people who are not “white”. With that in mind, the people of Atlanta consider it their right to speak on the human rights violation and also to bring awareness of the cruelty that happened to almost 1.5 million children.

Is there a Fund Raiser?

Luckily yes. The Daffodil Festival is conducted in Downtown Atlanta in early spring every year to benefit the Daffodil Campaign. The initiators are partnering with regional groups to promote this initiative and raise awareness through festivals, self-guided tours, and photo contests. Downtown Daffodil hosts several events like the Downtown Daffodil Dash a 5K run that begin and ends in woodruff parks during the bulb planting season to raise awareness and raise funds for the mentioned initiative.

From the past few years, Atlantans are regularly participating to plant daffodil bulbs and the daffodil count has increased significantly from the past few years. We can say that what started from 2000 daffodil bulbs has increased to a whopping number of 275,000 bulbs. This shows the importance of the event in the eyes of Atlanta residents and that it holds a special place in the millions instead of being a random Atlanta activity.

What is Daffodil Plantation Associated with?

The Downtown Atlanta Daffodil Planting is known to put light on the Holocaust. The Holocaust is connected with the most destructive event of human history known to man as World War 2. The Holocaust was the state-sponsored, organized murder of six million Jews by the authoritarian Nazi regime and its workers, with the persecution of millions more. History of the Holocaust is fundamental to understand how it has happened.

Let’s discuss the history of the Holocaust to understand its importance as an event.

The Nazis, who rose to power in Germany in January 1933, argued that Germans were “racially superior” and that the so-called German ethnic culture was threatened by Jews. The Nazis often persecuted other classes, due to their supposed’ racial inferiority,’ including the Gypsies and the impaired, including the Poles and the Russians. Many parties, including Conservatives, Socialists, Jehovah Testimonies and homosexuals were prosecuted for cultural, religious and psychological purposes.

In the 1920s, Hitler’s theories were nearly similar until his death during 1945. What improved was that he was given the power in 1933 to begin to understand them. In the 1930s, he tried his best to displace the Jews from German society. The Nazis returned to mass killing once the war had ended. During the Holocaust, nearly six million Jews were slaughtered. This included 1.5 million children. Formerly over 3 million, the Jewish community in Poland had dropped to about 300,000.

The Ethnic Background of Racism

Europe’s anti-Semitism may not have begun with Hitler’s Adolf. While it had been used in the 1870s, there was evidence that Jews were oppressed well before the Holocaust — even in the old world, when Roman officials burned the Jewish temple in Jerusalem, driving Jews out of Palestine. Religious tolerance was underlined by the Renaissance in the 17th and 18th centuries, and Napoleon and other European leaders in the 19th century enacted legislation that abolished long-standing prohibitions on Jews. Nevertheless, in many instances, an anti-Semitic sentiment took on an ethnic and not theological aspect.

The Atlanta daffodil plantation is certainly a voice against the cruelty that happened many years ago. With people raising their voice against non-humane situations, mass killing, racism, and sexism, it is evident that the face of this world will not have to witness such tragedies in the coming future.

All human beings are created equal and as a gesture of kindness, raising our voice against violence is the first step towards positivity and making the world a whole a lot of better place for people while they are here.

With many people still suffering from tragic conditions that they certainly do not deserve, the daffodil plantation and the events that take place along with it help raise awareness as well as funds to match with the effort.

Chancellor of the University of Georgia has taken a special interest in making this event public and spreading awareness therefore, the surprisingly increased population of daffodils is an answer to her struggle. With such an improvement, we can say that the initiative is thriving to help children across the world.