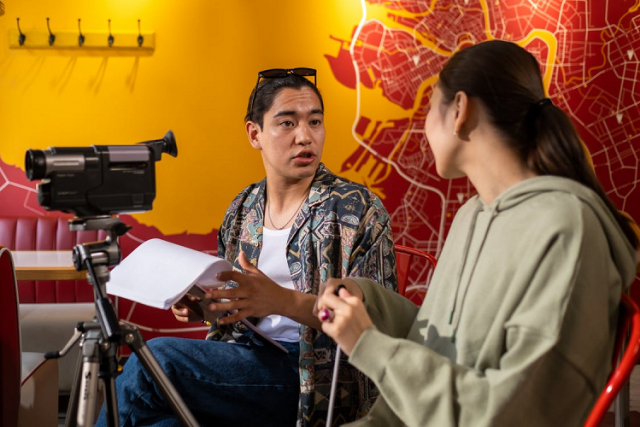 However, to make your video content stand out in your online course, you’ll need a script that’ll make it happen! Keep in mind that while there are many templates to look up online, it’ll ultimately be up to you on how you structure the script. Though, to make the script work, you’ll need to write down the right things, say the right things, and keep your students engaged from start to finish.

With that in mind, this essential guide with show you the importance of writing a script for your video courses, and then share some helpful tips on writing said script.

Why is a Video Script Important?

Think of video script writing as writing a story. If not a story, then like drawing a roadmap for your video. This part is especially important during the preproduction phase, where you plan lectures for your online course.

First, you have an idea for your online course. Maybe it’s a certain topic or a subject. Now that you have a niche, then it’s time to divide said topic or subject into subtopics. Suppose that you want to teach an online course in math. Math may seem too general. Perhaps dividing math into lectures or “topics” like addition, subtraction, multiplication, division, etc., can turn the main topic into a series.

Now that you have some kind of initial plan for your online course, it’s time to think of ideas on how to approach your niche. How would you speak to the students? How would you keep them engaged from the start of the video to the end of it? So again, the script will act as your roadmap, as you keep the students engaged with what you have to say. Without an effective script for your video, you’ll find yourself stumbling on your words, and your ideas will all be jumbled up when filming.

There are many video script examples to come by when you look at online certification programs like Coursera. This site utilizes video to help teach students online on a variety of topics, subjects, etc.

Now that you know the importance of writing a videos script for your online course, it’s time to get to work! Here are some helpful tips to write a video scripts:

First, the intro! It’s the one part of the video that grabs your viewers’ attention and keeps it all the way to the end. Now, it’s okay to be a bit quirky at the beginning, but don’t overstay your welcome. So, think about what you’re going to say within the first 5 to 15 seconds of the video. Since you’re dealing with students for your online course, how would you greet them? And what do they need to look forward to when they click on your video?

Here’s a good video script template to use in that case, as we return to the math example from earlier:

*Montage of clips play out as speaker speaks.

SPEAKER: We’ll put a face on multiplication. Then, watch what happens when we apply

multiplication on EVERYTHING! FIND OUT NOW! ”

2Know The Length Of Your Video

In the previous point, it was mentioned that there was a certain amount of time that’s acceptable for the intro. Now, let’s think about your video as a whole. How long do you want your video to be?

Nowadays, people want to know things right away, especially when it comes to videos. According to survey, videos that are up to 2 minutes long receive the most engagement from viewers. In other words, viewers want videos to be straightforward in order for them to receive the viewership. Although you can get away with your videos being between 5 and 15 minutes, but you still have to take into consideration that your video script template takes into account the timing. When doing so, keep these objectives in mind:

Now, this part is already a given. Since you’re running an online course, your ideal audience should be students. However, what your audience will look like depends on what you plan on teaching.

Now, when it comes to education, or doing something for educational purposes, you’ll need to think about who you’re teaching to. Keep in mind that not all students are created equal. In other words, you might be talking to younger students, or you might be reaching out to college-level students. No matter the grade level or age range, you’ll need to know who will watch your video.

So, in your script, speak to the audience like you know who they are. For example, talk to college-level students as if they were adults. There’s no need for the baby language, when addressing college students, unless it’s for comedic purposes.

4Don’t Be Afraid To Improvise

Now, who said that an online course video has to be “boring” or “dull”? Check out this sample video script:

“Welcome to the biology course! Today we’re gonna be talking about [subject]. [Say something quirky] Let’s dive right in!”

The trick is to make your video unique for people to watch, while still keeping that engagement with your viewers.

Once you have plenty of ideas running through your mind, write them down! Now, keep in mind: This is where you’ll brainstorm ideas. Also, remember that not all ideas will be used in your videos. In fact, some of your ideas might be perfect for the next video that you make.

However, let’s not forget about creativity. Being creative in your script is a plus. Creativity allows you to:

It’s okay if the brainstorming period has you writing down silly ideas. What if those “silly ideas” can be the necessary gems for your video? Plus, like general writing, the rough draft is NEVER the final draft.

So, make sure that you add an effective call-to-action in your video script.

Finally, it’s time to review the script. Here, you’ll need to read the script out loud, so that it makes sense. If you find any typos, or if something sounds off, then fix it.

If necessary, ask a friend or two to look at your script. Having extra pairs of eyes on your script can help you improve it during the revision process. Chances are, you might have missed something after reviewing it once.

So, there you have it!

If you’re looking to teach with an online course, then consider learning how to write a script for a video. Video scripts are a great way to keep your ideas focused, and to help you get your lessons and message through to your viewers.

With a strong script, your online course video will be impactful to those you teach.