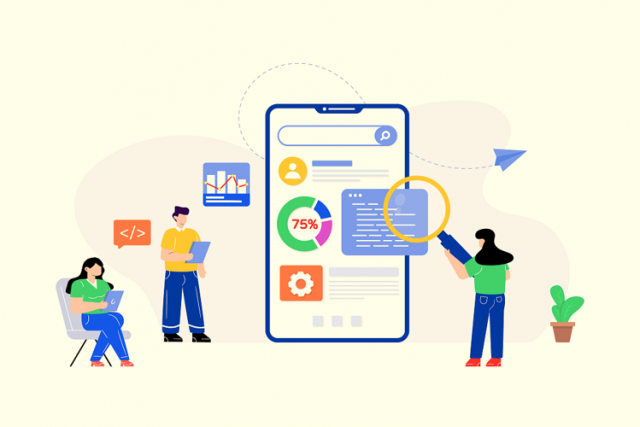 This post will assist you in swiftly comparing and evaluating the top 10 mobile app testing tools, as well as mobile automation testing tools and other related automation frameworks.

Anyone who develops or tests apps knows that testing is an important part of the process. Indeed, mobile testing is becoming increasingly crucial as more brands compete for a piece of the mobile user market, as more mobile devices and versions are released, and as more businesses build mobile goods.

Testing your mobile apps is critical as more organizations develop mobile products, such as mobile website builders, and the marketplace sees additional devices, platforms, and versions. When it comes to deciding which mobile testing tool is best for you, there are a plethora of options to consider, each with its own set of advantages and disadvantages.

So, let’s explore Top 10 Mobile App Testing Tools for both Android and IOS. But, before we start with, let’s understand the basics about Application Testing.

What is Mobile App Testing?

The practice of testing apps designed and developed for mobile devices like smartphones, tablet PCs, etc. for functionality, consistency, and usability is known as mobile application testing.

Mobile Application Testing can be categorized for the following:

You can use a variety of mobile app testing tools to implement your QA procedures. These technologies allow you to automate the testing of your Android and iOS apps, reducing the time it takes to complete the process.

What Factors to Consider for Mobile Application Testing?

You should pay close attention to the features of the mobile application testing tool and choose a dependable solution that offers several test creation options as well as support for multiple programming languages and platforms.

Following is the checklist to consider when choosing the mobile app testing tool:

Below are the best mobile app testing tools. You can use it for both Android and iOS apps to make sure your mobile apps will work better everywhere.

It is the most popular software testing platform that runs over two million tests each day in 15 data centers across the world. Over 50,000 customers benefit from their cloud-based test infrastructure, which allows them to release software in less time by transferring testing to the cloud. BrowserStack also assists you in debugging the apps using text logs, video recordings, and screenshots taken throughout the test run.

On a highly stable cloud architecture, BrowserStack’s platform gives you access to hundreds of genuine mobile devices and browsers, which scales as you’re testing needs grow. Dev and QA teams may use this testing tool to execute manual and automated tests on mobile websites and apps.

Appium, Espresso, XCUITest, and EarlGrey are all integrated into BrowserStack. The Mobile Testing Tool charges a small subscription fees.

Appium, without a doubt one of the greatest mobile app testing tools available, is used by the majority of professional testers. It is a robust tool for testing online and mobile apps, as well as hybrid projects. Hybrid application works seamlessly with both Android and iOS platforms, so you won’t have to update any code in your apps to use it for mobile automation. If this can also be used for automated functional testing in order to improve the overall functionality of an application.

Using the platform, you can test any software, be it automated or manual, on real devices or emulators. The platform supports native and mobile apps. Testing performance is improved by updating it on a regular basis based on the Appium framework. Test scripts can also be modified for better performance.

Robotium is a testing tool designed specifically for use with Android apps within an automated testing framework. Robotium is a tool for black-box testing Android apps.  Additional needs for this tool’s smooth operation include the Android SDK, Eclipse for the test project, Android Development Kit, and JDK.

Experts in automation can use IDE to help with all aspects of testing. It may be used to test Android and iOS mobile apps, as well as web and native apps. It works well with other software like TestRail, Jenkin, Travis CI, Jira, and others.

HeadSpin allows users to remotely test and debug mobile, web, audio, and video applications on thousands of devices, allowing you to test your app under real-world network conditions. Through the use of a single tenant dedicated device model that can be turned on and off, secure testing and increased performance may be achieved.

HeadSpin has a free trial but can be availed paying the subscription fees.

Users can perform both manual and automated testing of their mobile applications on real devices hosted on the cloud or on your premises using TestGrid.

Build and execute test cases with your testing and business teams without the need for programming experience. Users don’t have to worry about rewriting different test cases with TestOS because they can reuse practically all of the tests across different versions of the app as well as other apps.

Performance testing can also be used to assist you optimize and improve your app. You can reuse previously created test cases across several apps with TestGrid, test in parallel for faster test execution, and go to market faster.

JIRA, Asana, Slack, and other tools are all integrated with TestGrid. For continuous testing, you can also use your favorite CI/CD technology.

TestGrid is available at a meager fees for an unlimited number of users and one simultaneous test. Details about the free trial are available upon request.

Espresso is a test automation framework for Android that allows for the preparation and deployment of user interface tests. Developers can use this tool to design a test scenario and record their interactions with a mobile device. Developers can use snapshots to check the behavior of UI elements based on the analysis.

It is one of the best mobile QA solutions available, allowing mobile developers and testers to quickly test and evaluate their apps in each build, preventing crucial bugs from being live. On Android and iOS devices, track app render times, power consumption, resource utilization, crashes, problems, and more.

You can compare the performance of two different build sessions to find out what has changed and whether there are any new performance issues.

It allows to create and publish reports to any JIRA project. Furthermore, allows recording, sharing, and testing bugs.

The testing tool is free to use.