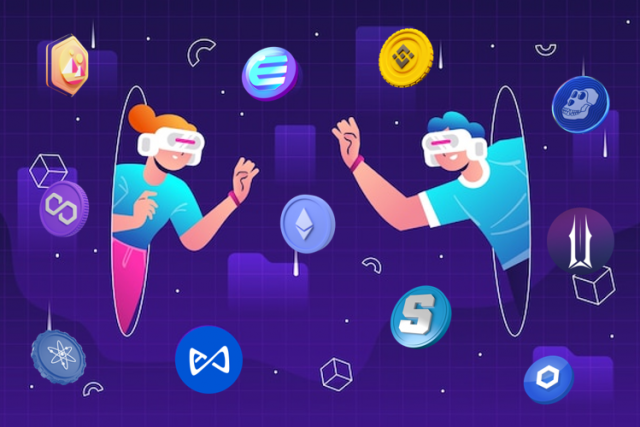 Think about attending a rock concert with thousands of people from different countries, exploring virtual homes, or earning cryptocurrency by participating in blockchain-based activities. In the metaverse, this is feasible, among many other things.

What is the metaverse, though? It is a digital environment that mixes augmented reality (AR) and virtual reality (VR) to produce an immersive setting. Although the metaverse is still in its infancy, some believe it to be the internet’s future, including Facebook’s Mark Zuckerberg, who rebranded the firm as Meta.

Is the metaverse really a fleeting trend, though? Time will tell, but according to financial behemoth Citi, the metaverse market might reach $8 trillion to $13 trillion in value by 2030 (all values in U.S. dollars). And by 2026, 30% of businesses worldwide will offer metaverse goods and services, and a quarter of us will spend at least an hour each day working, studying, socializing, and buying there, predicts research firm Gartner.

With values rising by around 120% over the course of the year, metaverse coins—tokens used on metaverse platforms to pay for things like non-fungible tokens (NFTs), AR/VR, music, and entertainment—had a blockbuster 2021. Despite a sharp decline in prices thus far in 2022, the market is up more than 25% annually.

What are Metaverse Crypto Coins?

Digital assets used natively within these immersive virtual environments are called metaverse crypto coins or tokens. We did explain that one of the technologies utilized to create a Metaverse is the blockchain in the section before this one.

Blockchains are essential for a decentralized Metaverse, but they also facilitate value transfers because the economics of these virtual worlds rely on tokens. Built on well-known blockchain networks, these tokens.

Ethereum is one of the most well-known blockchains used to host Metaverses, however its use is not needed. It is possible to host a Metaverse on an independent blockchain created to accommodate a specific virtual universe.

Cryptocurrencies from the metaverse can be created for a variety of functions in an ecosystem, such as:

We will discuss some of the top Metaverse crypto currencies to buy in the section that follows. We will discuss how to obtain these tokens as well as the value they add to their respective ecosystems.

Here are four cryptocurrencies with metaverse themes that you can purchase on the fully regulated Canadian cryptocurrency exchange NDAX. We have listed the best metaverse crypto coins available in the market, it will help you in buying decision.

The native cryptocurrency of Enjin, a business that Witek Radomski and Maxim Blagov co-founded in 2009, is called Enjin Coin (ENJ). Blockchain technology hadn’t yet been made public at the time.

The Enjin core team launched Enjin as a blockchain-based social gaming platform in July 2017 and raised around $19 million by selling ENJ tokens during an ICO (initial cryptocurrency offering). In June of the following year, on the mainnet, the Enjin gaming Metaverse was introduced.

The foundation of the Enjin ecosystem is the creation of numerous in-game objects by community members, such as custom tokens, digital art, gaming characters, and virtual properties.

The creation of in-game goods involves a straightforward procedure that includes:

This procedure essentially explains the ENJ token’s usefulness within the Enjin ecosystem. The asset also functions as a payment method, a medium of exchange, and a governance token.

The Ethereum blockchain powers the well-known Play-to-Earn (P2E) gaming metaverse known as Axie Infinity. Axie Infinity, a 2018 game developed by the Sky Mavis team, is based on the well-known NFTs Pokémon and Tamagotchi. It requires players to gather, breed, trade, and battle in-game creatures called “Axies,” which are essentially NFTs.

The ERC-20 token known as Axie Infinity Shards (AXS), which performs the following tasks, is at the core of the Axie Infinity ecosystem.

The metaverse is a shared digital world where you may design environments and trade digital goods with others, including NFTs, beyond just gaming. Enter the Decentraland virtual world. It is one of the success stories from the ICO craze of 2017, when it raised over $26 million in ether from investors.

Users can build their own settings, including marketplaces, and buy and sell tokenized virtual land pieces. On the Decentraland blockchain, they may also create applications for others to build on. MANA is the utility and governance token for Decentraland, enabling users to vote on initiatives and policies as well as purchase real estate and other assets.

The Sandbox is a 3D virtual environment powered by Ethereum where users may purchase, trade, share, and monetize digital assets, much to Decentraland.

The Sandbox, which Pixowl introduced in 2011 and had 40 million downloads, was a popular mobile game platform before it switched to a blockchain-based 3D metaverse in 2020. The next year, Softbank led a $93 million investment round for it. Additionally, The Sandbox has more than 50 partners, including Snoop Dogg, Atari, and CryptoKitties.

The native token of the platform, SAND, is employed in all interactions and transactions. Players can either buy SAND on a cryptocurrency trading site or earn it through gaming.

ApeCoin is a Web3 coin that is functionally equal to all others. Since ApeCoin is a widely used ERC-20 token, it is technically recognised by the majority of businesses. Additionally, the coin is already used as NFT rewards, and BAYC holders receive free APE that they may instantly cash in.

ApeCoin is used by outside developers to participate in the ecosystem and include the token in their services, games, and other projects. For instance, the coin is used as a player incentive in the play-to-earn (P2E) mobile game Benji Bananas by Animoca Brands. When playing, they will be able to collect unique tokens and exchange them for ape coins.

ApeCoin may become a highly sought-after metaverse coin this year with plans for integration with the future metaverse Other side. As a result, ApeCoin will become a transaction token in metaverse markets. If P2E components are included in the Metaverse, it may also be utilized to reward gamers.

The “internet of blockchains” known as Cosmos attempts to build a network to fill in the gaps enabling cross-chain data transmission without centralized oversight and to speed up transactions. The Cosmos Hub acts as a hub for connecting the many chains into a specific area where they can communicate with one another. The governance token for Cosmos Hub is the ATOM token.

Jae Kwon, a computer scientist, created the open-source blockchain launching programme Tendermint in 2014. The Tendermint consensus algorithm’s core was later used to launch the Cosmos network with assistance from the Interchain Foundation (ICF). Three years later, ICF successfully raised over $17 million through an ICO using ATOM tokens. The money raised through Series A fundings from Tendermint Inc. aids in the continued development of Cosmos. Co-founders Ethan Buchman and Jae Kwon then wrote and published a white paper on Cosmos in 2019, and in March of that same year, Cosmos was formally launched on the mainnet.

The Cosmos Hub maintains interoperability between all zones in the Cosmos network using the Proof-of-Stake (PoS) method.The Inter-Blockchain Communication (IBC) protocol, which facilitates communication between dissimilar blockchains, aids in extending interoperability beyond Tendermint-based blockchains. Any PoS cryptocurrency, such as Cardano (ADA), can connect to the IBC, for instance.

By addressing network sovereignty difficulties in existing networks, Cosmos also seeks to make it simpler for users to develop and deploy DApps on the network (e.g. Ethereum).

Some real-world information is needed by the Oracle network, which is transmitted over all computer networks. ChainLink (Link), a particular kind of Ethereum currency, intends to give incentives in the form of data to the network’s chain of connected computers.

By providing access to real-world data, this ChainLink exchange over a global network is in charge of meeting the needs of tiny contracts. As a result, they are assisted in providing operations like online transactions, API hydration, and connecting to other data sources securely.

The recently published BNB Chain comprises the BNB Beacon Chain for BNB Chain governance and the BNB Smart Chain, which is still compatible with the Ethereum Virtual Machine (EVM) (i.e., staking and voting).

The BNB Chain is a development in Binance’s recent MetaFi initiatives by enhancing interoperability and creating the foundational infrastructure of the “world’s parallel virtual environment.”

Ethereum is a decentralized blockchain-based application featuring smart contract functionality. The second-largest cryptocurrency in the world, Ether, is supported in significant part by open source Ethereum. The blockchain used by Ethereum’s smart contracts and applications allows for flawless operation free from fraud, downtime, outside interference, and control.

Ethereum is a different programming language that permits the development of distributed applications. One of the biggest Ethereum projects is Microsoft’s collaboration with ConsenSys, which offers Ethereum Blockchain as a Service on Microsoft Azure to give developers and enterprise clients a one-click, cloud-based blockchain development environment.

A scaling solution called Polygon, originally known as the Matic Network, intends to offer a variety of tools to increase the speed, lower the cost, and simplify transactions on blockchain networks.

Ethereum, a platform that is home to a variety of decentralized applications, including those where you may join virtual worlds, play games, purchase art, and partake in a range of financial activities, lies at the heart of Polygon’s concept. However, because of the high cost of transmission and blocked bandwidth caused by this much activity on its blockchain, Ethereum is now all but useless.

The Illuvium whitepaper claims that NFT projects and users are having trouble with transaction costs on the Ethereum network. Due to Ethereum’s restricted transaction capacity, users have been forced to bid up gas costs on the network in order to resolve transactions as rapidly as possible. The trading volume for NFTs has reduced as a result.

How Do I Buy Crypto Coins From The Metaverse?

Cryptocurrencies for the Metaverse are easy to obtain. Four simple phases make up the process in general, although they may change based on the asset you want to buy. Since some of these Metaverse crypto coins are less well-known, major cryptocurrency exchanges do not generally support them:

There are a plethora of platforms available for trading digital assets, but it is recommended to stick with the platforms that have the highest trade volume recorded, the most supported assets, and the best usability.

Leading sites where you can purchase Metaverse currencies include:

You must transfer some fiat money or, if you have other cryptocurrency assets, cryptocurrency to that exchange after setting up an account on one of the centralized platforms from the previous step.

Users can swap immediately on decentralized exchanges (DEXes) without transferring assets to another account. Despite being more useful, they are less user-friendly, especially for beginners.

Now that you have your Metaverse crypto coins, it’s time to utilize them.

Step 4: Transfer to an external wallet

To use the majority of these Metaverse platforms, you will need to keep your native tokens in compatible wallets. The majority are based on Ethereum, but you will need to move your freshly obtained coins to their native cryptocurrency wallets if you want to participate in a mystery.

The MetaMask cryptocurrency wallet will be adequate for the majority of Metaverse platforms to ensure that you can retain your coins securely and connect to these virtual universes with ease. In order to begin your Metaverse trip, send your assets from the exchange account to your wallet.

Metaverses are gaining popularity as blockchain technology becomes more widely understood and embraced. These alternate virtual worlds provide a number of advantages, such as the chance to make money, a source of amusement, and for some people, a sense of community on a worldwide scale.

Owners of some of these Metaverse crypto coins may be able to contribute to the growth of Metaverses, which are already positioned to become major participants in the blockchain industry. It is not only simple to purchase these assets, as described in this tutorial, but depending on your aims it may also prove to be worthwhile.