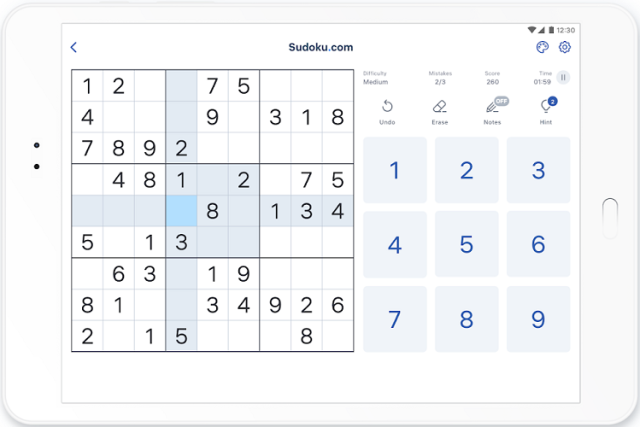 One of the best things about Sudoku is that it has clear and easy-to-follow rules. These puzzles are a true challenge to figure out the solution to because of how straightforward they are. A player simply needs to be able to think logically and be familiar with the numbers from 1 to 9 in order to play Sudoku free.

The objective of this game is simple: use the numbers from 1 to 9 to fill in and finish the grid without repeating any number. The difficulty comes from the limitations the player must adhere to in order to fill the grid.

If you are not familiar with Sudoku rules, and you would like to indulge in this puzzle game more often, you are in the right place. In this article, we explore Sudoku rules that every player must be aware of. Let’s get started!

Rule 1: The numerals 1 through 9 must appear only once in each row.

The player must pay close attention to filling in every row of the grid without using any duplicate numbers. It doesn’t matter what sequence the digits are in.

No matter the level of complexity, each Sudoku free puzzle starts with assigned numbers on the grid. These numbers should be used as hints by the player to determine which digits are absent from each row and insert them.

Rule 2: The numerals 1 through 9 must appear only once in each column.

The grid’s columns and rows are subject to the exact same Sudoku rules. Additionally, the player must fill in these with the numbers 1 through 9, making sure that each digit appears just once in each column.

The numbers assigned at the start of the problem serve as hints for identifying the missing digits in each column and their locations.

Rule 3: Each block can only have one instance of the digits (nonet)

In actuality, this means that another constraint on the arrangement of the numbers is found inside each block as the process of filling the rows and columns without duplicate digits proceeds.

Rule 4: This states that every column, row and nonet must add up to 45.

The player can just count the numbers or use their arithmetic prowess to add them all up to determine whether digits are missing from each column, row or block or if there are duplicates. If a digit appears just once, each row, column, and group must add up to 45.

1Each puzzle has a distinct solution

Each Sudoku puzzle only has one possible solution, which can only be reached by correctly using the Sudoku rules.

Only puzzles with bad design or, more frequently, ones where the player makes a mistake in solving and a duplicate is concealed elsewhere on the grid, can have many solutions.

According to the Sudoku rules, it is forbidden to attempt to predict the answer for each cell. These mathematical riddles require logic not guesswork.

The only hints required to solve the grid are the numbers assigned at the start of the game.

According to Sudoku rules, it is both acceptable and even recommended to write down the numbers that are contenders for each cell. These aid the player in maintaining a record of their progress as well as a clear and ordered line of thought.

These notes also become more important as the difficulty level of these puzzles rises in order to be able to use the sophisticated problem-solving strategies, such as X-Win g strategy or Swordfish strategy required to complete the grid.

Sudoku is an amazing puzzle game, and that’s for a reason. Not only is it fun and addictive to play, but this game is a brainteaser and will leave your thinking skill in great shape. Moreover, Sudoku can help you improve your concentration level and well as logic reasoning to solve it. these two essential skills can better your life in various aspects, including at work or with your studies.

The best thing about Sudoku, as already mentioned, is that its rules are pretty simple and straightforward. So, if you keep these rules at the back of your mind, you will quickly and effortlessly solve your Sudoku puzzle. Now that you are aware of Sudoku rules, you can download it on your smartphone or table and show your family and friends your prowess at solving Sudoku.