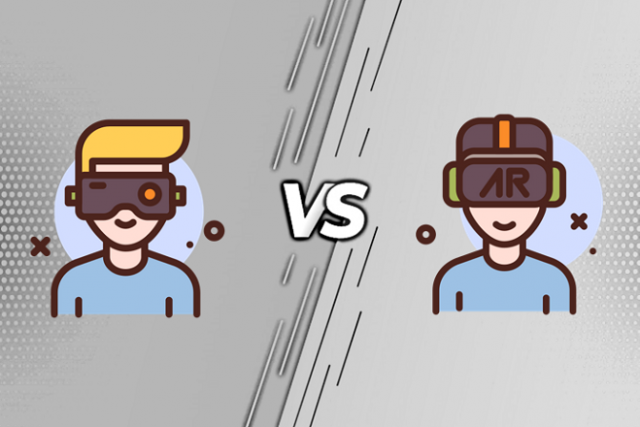 Virtual reality (VR) and augmented reality (AR) hold great promise for the future of gaming, marketing, e-commerce, education, and a variety of other industries. Both technologies are known for providing an upgraded experience that combines a virtual and real world with enhanced 3-D images. Although the two can be easily confused, there are some fundamental differences between them.

You may have heard of these technologies even if you have never slipped on a headset and found yourself on another planet (Virtual Reality) or chased down a rare Pokémon with your smartphone in hand (Augmented Reality). The distinction between virtual reality and augmented reality is explained in this article.

Both technologies are built on a digitally rich experience. We can see digital materials incorporated into the real world with AR, whereas VR mimics the real world by incorporating virtual objects into a digitized simulation. Before comparing differences between VR and AR, let’s start with the basics, such as “What is VR?” and “What is AR?”

What is Virtual Reality?

A computer-generated representation of another universe or reality is known as virtual reality (VR). It’s commonly seen in 3D movies, virtual tours, and video games. It aids in the creation of realistic simulations and the “immersion” of the spectator through the use of computers and sensory instruments such as headsets and gloves.

How does virtual reality work?

Virtual reality is primarily concerned with simulating vision. A VR headset screen must be placed in front of the user’s eyes. As a result, any engagement with the real world is eliminated. Two lenses are placed between the screen in virtual reality. The user must adjust his or her eyes based on the specific movement and location of each eye. An HDMI cable connected to a PC or a mobile phone can render the graphics on the screen.

To imitate a real-world experience, goggles, speakers, and even handheld wearables are used. You can use visual, audio, and haptic (touch) stimuli in virtual reality to make the created world more immersive.

What is Augmented Reality?

Augmented Reality (AR) is a technology that combines the digital and physical worlds to create a virtual experience. Apps for mobile or desktop that use augmented reality technology to combine digital elements into the real environment. Augment Reality is the full name of the technology.

For instance, AR technology can be used to overlay score overlays on televised sports games and to pop out 3D photographs, texts, and emails.

How does augmented reality work?

In order to provide appropriate content to the user, AR employs computer vision, mapping, and depth tracking. This feature allows cameras to collect, send, and process data in order to display digital material that is relevant to whatever the viewer is looking at.

In augmented reality, the user’s physical surroundings are enhanced in real-time with contextually appropriate digital content. With a smartphone or special hardware, you can experience (AR) augmented reality.

Because you’re already familiar with how VR and AR work, let’s go through the differences between the Virtual Reality and Augmented Reality.

The primary goal of augmented reality technology is to improve our daily lives. Visual aid software, for example, can improve your driving experience. Consider how, with the help of AR tools, your windshield may transform into a head-up display, allowing you to observe your current location or speed without taking your eyes off the road. By pointing your iPhone at items, you may translate writings in other languages into your own and gain more information.

Level of immersion Users in Virtual Reality are completely cut off from the outside world. Virtual reality is a comprehensive simulation that is not based on reality. It’s not about seclusion with augmented reality; it’s about enriching the physical environment.

Devices. Today, you may choose from a variety of VR headsets and glasses in a variety of price ranges. Prices for virtual reality headsets and eyewear range from a hand-assembled cardboard headset to the high-end Oculus Rift. Glasses, smartphones, and tablets can all be used to experience augmented reality.

Which is the best option?

Neither? Both? Because they excel at different things, there is no contest between VR vs AR.

However, VR and AR share one characteristic: they both have the potential to improve and enrich our lives in ways we have yet to envision. This technology has the ability to alter our interactions with the outside world and others.

To put it another way, what is the difference between virtual reality and augmented reality? Everyone comes out on top.