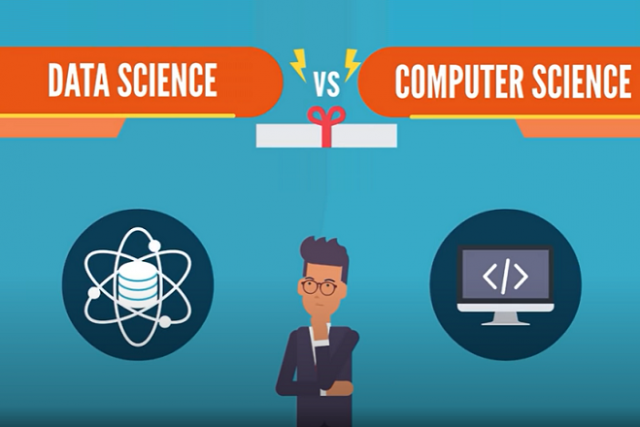 Curious about difference between data science vs computer science? You’ve come to the right place!

In this article, we will thoroughly explore the two disciplines by focusing on their definitions, the various areas that they explore, and how they’ve came to be. The ultimate goal of this guide is to get a full understanding of the two.

Without further ado, we will get right into both data science and computer science.

At a glance, the two disciplines may look and sound the same. However, upon further inspection, the two have varying focuses. Here, they are described as follows:

Needless to say, so far, data science acts as the basic tool for computer scientists to comprehend algorithms and programming. So, possibly, the two fields aren’t as different as one might believe.

Now, what we’ve discussed in the previous section was only the gist of the two disciplines. Now, lets dive deeper, where we’ll explore the following:

As we look into these two disciplines further, you’ll get a better understanding of how each work without needing to decide which is the “better one,” since you’ll most likely need to know both.

In essence, data science has a main focus on doing the following with data: collecting, organizing, and analyzing. By doing these things, the discipline lets you view data as a unique concoction of math, computer science, and statistics.

Practitioners known as data scientists use various techniques on computers, along with statistical analysis, to transform a lot of information into insights that people can use. First, data scientists collect the data from data sources by cleaning salvageable data, and erasing the bad data. Whatever is viable to use, data scientists will collect and save. Next, the data will be organized using categorization, alphabetizing, graphing, charting, etc. Afterwards, the data is analyzed, and then translated into workable solutions, depending on the industry.

Data science isn’t just for business intelligence, but also for other various fields, such as:

Essentially, data science holds the key to information that can be incorporated in virtually any field.

So, how did data science come about?

Believe it or not, data science seemed to have gotten its official start when mathematician John W. Tukey in 1962 suggested that the discipline would evolve as a modern-day electronic computing on data analysis – a type of science that would be further discovered. He later went on to publish Exploratory Data Analysis in 1977, of which he explains that data should be used to create hypotheses and test them, and that Exploratory Data Analysis and Confirmatory Data Analysis needed to work together to make these testing possible.

This experimentation wouldn’t be fully realized until 1997, until the launch of the journal Data Mining and Knowledge Discovery. This journal sung the praises of something called “data mining,” which was a practice of collecting data from very large databases.

However, the call for the field to be an educational path to careers wasn’t fully realized until the 2010s, when there was a demand for more technological advancements. It was through the release of the Apple iPad and the iPhone in 2010 that people started to realize that data mining was a significant part of developing such wonderous and revolutionary technologies.

Today, data science is treated as a discipline, and is offered in various college and university programs.

Now, since it’s an evolving discipline, data science has principles that essentially allows the data to speak for itself. Therefore, scientists will find themselves collecting, organizing, and analyzing data on their end.

Just keep in mind: Since data is always evolving, so will its principles. In other words, the principles of data science may be one thing today, but something completely different tomorrow.

With that said, here are some of the elements of data science (again, many of these are subject to change):

As you can see, these principles place the scientist in an analytical position, rather than actually testing and playing with data.

That’s where computer science comes in!

As for computer science, it’s far more complex than data science, to say the least. However, there’s a reason for that.

Computer science is more than just analyzing data, but also focuses on the idea of “computing.” Though, rather than just being the foundation for everything computing, this discipline also involves the following:

Yes, all of this can be a mouthful, when it comes to computer science; however, this is the reality for various industries. Such industries include:

Essentially, computer scientists will be experimenting with data, rather than watch the data. In fact, this type of scientists will be responsible for developing technologies, solving problems in the digital realm, and designing new software and applications. Needless to say, their studies on computers and algorithms would prove most beneficial, especially when working with data.

So, how did computer science get its start?

Now, in terms of computers themselves, computer science with actual computers didn’t come into fruition until the early 1960s, when it was treated as only an independent discipline. Keep in mind that the electronic digital computer for consumer use wasn’t invented until two decades later. In the meantime, computer science resided within the following fields:

However, it wasn’t until the emergence of the Internet in the 1980s that computer science started to spread into consumer society. Once computers grew more personal, moving into the homes of consumers, computer science had spread itself into various fields, including:

With that in mind, computer science consists of the following principles:

We hope that this guide has helped you to understand the difference between data science vs computer science, and that you can now embrace them with confidence!