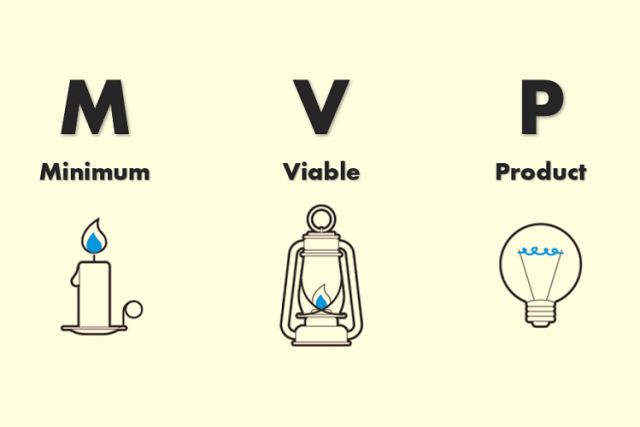 Product development is an ongoing process that may take many months or even years. Companies need to test and obtain customer feedback to create truly valuable products, such as software, apps, SaaS solutions, etc. This is when the use of the minimum viable product (MVP) comes in handy.

What Is a Minimum Viable Product?

An MVP does not have a universal definition. This term can be understood as a product or service created using a minimal set of tasks, resources, and effort. An MVP is usually very simple and has only a few features. Sometimes, it can be presented in the form of a landing page. However, even such MVPs can be useful in evaluating potential customers’ interests and behavior. The right MVP should have three key features:

MVPs do not have to be perfect. In fact, they usually have many flaws that should be addressed later. However, even imperfect products can bring immense value if they are pioneers on the market and reach the target audience first. People tend to remember innovators and will likely return when the product is perfected.

It is essential to differentiate between MVPs and Minimum Marketable Products (MMPs). While they may often mean the same thing, the latter concept is focused on earning. It refers to the smallest set of functionality that can be marketed to potential customers. MMPs should also be recognized as valuable and worthy of people’s attention and money. However, unlike MVPs, they are complete products ready to sell and can ensure decent sales.

You need to consider using MVPs if your company faces one or several of these issues:

Why Are MVPs Useful?

The purpose of an MVP is to enter the market quickly and help the company understand whether it’s on the right track. Its short-term goal is to reach the market, while its long-term goal is to achieve sufficient product adoption. An MVP may need only a handful of customers to test a particular assumption. However, it can help provide quick and relevant improvements that would satisfy a larger audience in the future.

The benefits of MVPs for tech startups are undeniable. Creating and distributing prototypes is a search process for them, which allows studying the market gaps and needs. Developing a product is too costly and too time-consuming, so small startups can rarely afford to take time and deliver fully functional products. Besides, the tech industry is evolving fast, so the competitors can occupy your niche in the market while you seek perfection. You can end up with a costly, outdated product that nobody wants to purchase.

The use of MVPs by startups implies avoiding perfection and completeness. The whole idea of creating and testing MVPs is based on a desire to learn and change continuously, keeping up with the market changes and customer demands. The readiness to start with “good enough” is also practical, as it helps save scarce human and financial resources.

Another benefit of MVPs is that they help secure funding for large-scale product development. Before a startup can ask for money, it should test its assumptions and ensure its product is worth the effort. After thorough testing through an MVP, a company can provide evidence for investors, proving that the product is competitive and promising.

Examples of MVPs for Startups

Studying the successful examples of MVPs may help you better understand the requirements for this type of product.

This widely used file-sharing tool did not win the market instantly. There was much work behind the simple yet functional interface. Developers needed to ensure that the service would be integrated with all computer platforms and operating systems and work seamlessly and quickly. They would not be able to produce a product of this level of sophistication and complexity without testing it first. A demo video MVP created by the developer team has become a widely cited example of the best practice in using MVPs.

Zappos is another example of how a company can be built from almost nothing. The founder of this e-commerce shop came up with the idea of an online shop that would sell shoes. He knew that most startups fail quickly, so he was reluctant to purchase the inventory before testing the system. Thanks to an MVP, the entrepreneur realized that people wanted a service of this kind. After the first orders were placed, he simply bought the shoes in stores and shipped them to customers. This simple MVP idea helped the company grow very fast. In 2009, Amazon bought it for more than one billion dollars, which shows that MVPs help monetize startup ideas. Amazon itself used a similar MVP strategy, which allowed it to become one of the most influential companies in the world.

It’s hard to imagine that it all started with an MVP when one speaks about this successful company. However, an MVP actually helped Brian Chesky and Joe Gebbia to test the idea of renting their apartment. They could not even imagine how popular this renting service would be when they created a simple website and uploaded photos of their apartment. Nowadays, millions of people around the globe use Airbnb and appreciate the opportunity to secure affordable accommodation for work or leisure.

Founders of this international company also took advantage of the MVP benefits. Like many people who use cabs, Garrett Camp and Travis Kalanick were frustrated by the cost of this service. They came up with the idea of connecting people who needed a ride with those who had a car and were willing to provide this service. The founders did not scale the idea instantly, knowing that it may fail outside of their city. However, their MVP, known as UberCab, became so successful that they decided to invest more in Uber. Thus, thanks to MVP, millions of people around the globe can now enjoy greater access to affordable taxi services.

A company that now connects millions of customers with businesses began as a simple MVP. Everything started with an elementary WordPress web page. The founders knew their idea of group buying was innovative, but they waited until they built a sufficient customer base and collected feedback to scale their venture.

This service allows scheduling one’s social media posts. It used an MVP in the form of a landing page. The founders simply asked potential customers whether they were interested in the service and willing to pay for it. When they collected the feedback, they understood that the idea was worth developing, which helped save time and financial resources. Interestingly, the landing page was followed by the next MVP. Thus, by gradually adding new features and evolving, the company managed to create a convenient service widely adopted by the audience.

In the 2000s, dozens of e-commerce websites emerged and failed. The problem was that they wasted too much time and money on ideas customers didn’t even need. Etsy’s founders were smarter. They launched a very simple website and invited users to sign up and sell things they produced themselves. The service turned out to be a success, allowing its founders to see that it was worth developing further.

As you can see, all these examples have one thing in common. Companies began with simple functions and design and did not scale until it was apparent that people would use the services. If you want to learn more about the success stories attributed to MVPs, check the history of Spotify, Twitter, Facebook, and Foursquare.

MVPs Are Your Friends

Using MVPs requires patience and stubbornness. Developers need to be open to feedback and have innovative thinking to create products and services that truly stand out. MVPs help utilize resources wisely and offer competitive products. Startups that struggle with securing investments find this strategy particularly valuable because it helps test the ideas before implementing them. Examples of successful companies show that MVPs are a wise, practical strategy for tech startups.