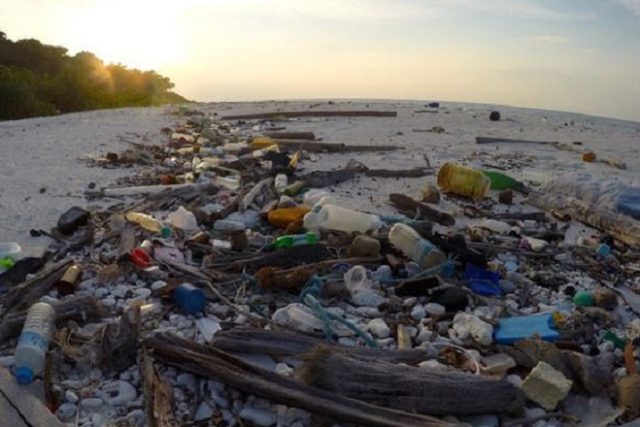 Is it time to stop using plastic water bottles, or are we too late?

Plastic water bottles are quickly becoming a growing concern for communities, municipalities and governments worldwide. In 2017, water bottles were the #1 most consumed beverage in the USA. While it’s encouraging to know that consumers are increasingly choosing healthy water over soft drinks and other sugar-loaded beverages, the discarded plastic produced as a result is altering our planet ecologically –  but not for the better.

Disposable plastic goods such as water bottles account for a growing percentage of municipal waste, which is both costly and environmentally damaging.  In 2015, plastic represented approximately 18% of all municipal solid waste in the US. Between 1980 -1990, plastic waste tonnage doubled from 6670 tons to 13,780. By 2015, that number rose to a staggering 26,010. The popularity of bottled water and the proliferation of plastic resin in a wide range of disposable consumer products are reflected in these numbers.

Even though recycling efforts have increased drastically since the 80’s by 100x, global usage is outpacing our recycling rate.

Bottled water may be cheap, but producing it is expensive! Manufacturing, treatment, and distribution of bottled water costs more money than it does to produce clean, healthy tap water. According to a 2009 study, the average litre of water requires somewhere between 5.6 and 10.2 million joules of energy. A litre of tap water, however, only costs about 0.005 million joules per liter for treatment and distribution.

Want clean healthy drinking water on demand in your household? You may find these reviews of the best water cooler helpful.

Plastic water bottles we dispose of can take up to 1000 years to decompose.

Plastic is not only an increasingly larger segment of municipal solid waste, it’s an environmental hazard with long-term effects. Generations of people will suffer the impact of plastic consumption as landfills become overwhelmed. The chemicals from decomposed plastic make their way into our land, water, and air, ultimately harming all life on earth as we know it.

Between 26% – 41% of all discarded PET plastics in the US are the result of water bottles.

Bottles and containers made of PET (Polyethylene Terephthalate) plastics are not biodegradable. When we dispose of them, they remain in our landfills, rivers, and oceans permanently.

800,000 metric tons of pollution are produced each year by manufacturers of plastic water bottles.

Plastic bottles are made from fossil fuels, specifically petroleum and natural gas. Even giant manufacturers like Coca Cola, Unilever, and Nestle, however, only use a mere 6 -7 % of recycled plastics to create new bottles. Pressure is needed to encourage more manufacturers to reduce and recycle their plastics manufacturing.

Yes, even BPA-free bottles can leach small traces of benzene, tetrahydrofuran,  mold, fecal coliform, styrene, sanitizer, and glass particles. PET bottles should only be used once. Repeated use can expose you to carcinogenic chemicals that are disruptive to human hormones.