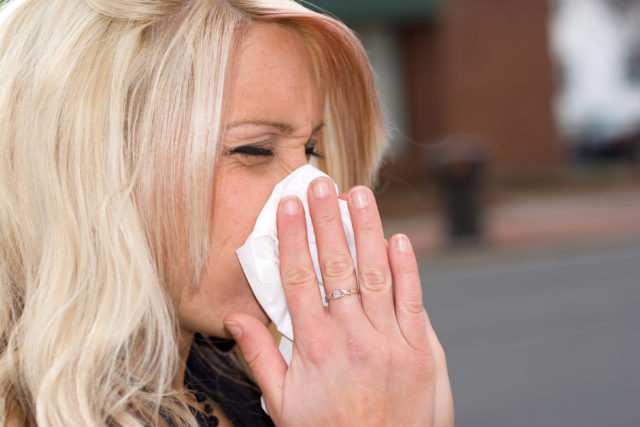 All people have experienced a sneeze, one of the natural reactions of the human body. While many tricks people try to prevent a sneeze ridiculously, I, personally, a sneeze is always coming on naturally because it often brings me the natural euphoria. What makes me sneeze? Why does sneezing feel good? I have searched for information on the Internet to get scientific answers. Today, in this article, we will discuss the topic “Why does sneezing feel good?”

What can make you sneeze?

Before discussing the topic “Why does sneezing feel good?”, we should learn more about what makes you sneeze. According to Dr. Alexis Jackman from the University of New York, sneezing is the combination of ear, eyes, and throat. A sneeze is considered one of the defensive responses of our body caused by stimulation. The defensive response acts to remove things which are factors outside our body. If you want to sneeze, there may be something which is probably irritating or tickling inside your nose. A sneeze, also called sternutation, is known as the body’s way of getting an irritation out of your nose.

Pollen, bright light, cold air, pepper, pet fur, dust can be the most common causes of sneezing. When you get a tickle (such as some pollen) inside your nose, a message will be sent to a particular area in the brain which is known as the sneeze center. Then, the sneeze center will send a message to all the muscles which are involved in sneezing in order create a complicated process called the sneeze.

Some muscles in the body involved in sneezing include eyelid muscles, the chest muscles, the abdominal (belly) muscles, the muscles which control the vocal cords, the diaphragm (beneath your lungs which are responsible for breathing), and muscles at the back of the throat.

The sneeze center can make all these muscles have to work together to get that irritation out of the nose. According to many researchers, sneezing can be up to 100 miles per hour.

Why Does Sneezing Feel Good?

According to Dr. Jackman, when you suffer from supersensitivity and the condition has increasingly become rising. After sneezing, you will feel rather relaxed. It is the possible reason you get more comfortable after sneezing. Besides, mucus often contains foreign particles which irritate the inside of your nose. Therefore sneezing expels irritation and cleans your nasal cavity effectively. It is another reason why does sneezing feel good.

In addition, Endorphins, the chemicals give pleasure feeling, are produced by the body during sneezing. Also, sneezing stimulates the production of Serotonin which makes you feel good. Moreover, many researchers confirmed that a sneeze is known as an unconditional reflex and it cannot stop since it has started. It also answers to the question “Why does sneezing feel good?” In fact, when starting to sneeze, you can feel a significant pressure on your nasal cavity. Indeed, after you generate sneezing, all the pressure will be released, which gives you a comfortable feeling.

What will happen if we try to resist sneezing?

Sneezing is known as one of the irresistible actions. In public places; however, a sneeze is considered as an impolite action. Therefore, this is the reason why many try to stop a sneeze. As a result, the volume of saliva which would have been come out from your mouth will be released from your ears at an unusual rate which is several times faster than speed 64 km per an hour. For this reason, stop sneezing can lead to a sudden rise in your blood pressure, causing brain damage and even resulting in death.

What should you prepare before you sneeze?

As we know, our nasal mucosa acts as a defense mechanism. Sneezing helps to remove the mucus as well as dust sticking to the mucosa from your nose. As such, dirt, air, fur, snivel, and bacteria will be released when we sneeze. Thereby, you should keep a handkerchief or some tissue papers to cover the mouth in a polite way instead of stopping sneezing suddenly with your hand. The handkerchief should be washed after each used.

9 Ways to Make Yourself Sneeze Effectively

Having a sneeze is necessary. However, in some cases, you cannot have a sneeze. It will make you frustrating, especially if you need to release something (dirt or pollen or a fur) from your nasal passages. Below are a few tricks you should try.

In conclusion, sneezing is considered as the natural reaction. However; not all people understand the importance of sneezing. This article provides you some information on why does sneezing feel good and some tips on how to make yourself sneeze effectively. If you find the writing useful, please click like for more.

Does Your Heart Stop When You Sneeze? Yes or No?